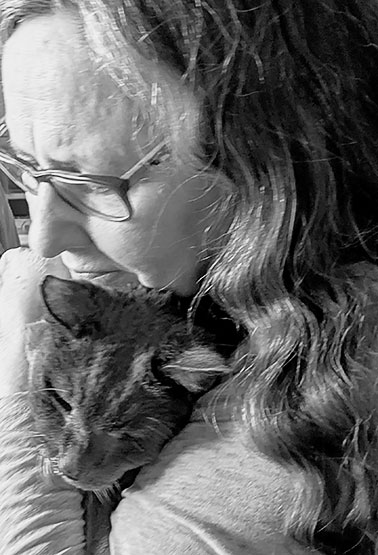 Simeon, Son of Coco, brother of Maximus, beloved companion to Mari Perron and her family

Simmy came to me during the first year of my reception of A Course of Love (which began December 1, 1998). If you don’t know the story yet, the Course flowed smoothly every time I sat in readiness for it to do so, until I had completed Chapter 19. Then I was paused. I did not hear anything for the next ten weeks. In the pause I decided to open a coffee shop. That’s where Simeon found me.

While no one who knew about ACOL thought it was a good idea to start a business, not very many people knew, including my family. As far as they were concerned, I was a writer working on my next book, and that was all. I didn’t know how to tell them I was receiving a course from Jesus.

My idea, in opening the shop, was to provide an opportunity to my young adult daughters, and also to get them out of the house so I could have more peace and quiet in which to receive. (That wasn’t the way it worked out, but that’s another story!) We opened for business on October 8, 1999. On December 1, 1999, exactly one year after it began, “The Course” of A Course of Love was complete. It seemed, for a short while, that The Course would be the whole of it until in April, A Treatise on the Art of Thought began. It was at that time that Simeon was born and some weeks later when a customer brought in a box of kittens. My daughter Mia chose Maximus. Angela chose Simeon. I told them they would have to take full responsibility. They were “their” cats.

Just after bringing them home, I got sick. That is how I remember my bonding with Simeon. He snuggled at my neck during that illness and pretty much never left my side after that.

And so, Simeon was very connected to the experience of A Course of Love and even lingered for the completion of “Mirari,” the first book of The Way of the Marys. It was as if he accompanied me through these two experiences, as well as many “In Touch” videos that I did the last few years.

I’m so glad I had the foresight to tell his tale while he was still a handsome fellow. I am tentative in it, and I get my dates mixed up, but it’s still a sweet record, especially since Simeon seemed to know I was talking about him! You can see it here: https://www.youtube.com/watch?v=BHwWA2aMAxg